The Evolution of Childhood

The Evolution of Childhood

When discussing education, it is important to first understand the context and environment as well as the forces--physical, social, political, and psychological-- operating within in that environment. For this post, we take a quick look across the history of the childhood and how it was perceived over the course of the last few centuries. We focus on Western (and predominantly American history) to create a frame of reference to help us build pertinent and effective educational materials that address the needs of the current environment many of us find ourselves living in.

What we find is that a history of changing ideologies of parents and parenting in the West, have produced a psycho-class perpetuating the crisis of self. With issues of anxiety, depression, trust, and self-esteem, the children of today and the adults of tomorrow increasingly struggle to develop personalities with a durable sense of self that is both independently secure and socially compatible. For Muslim children living in the West, we add on layers of added confusion. (read more in "A Ghazalean take on Personality Development.")

Families have always been a crucial institution of society and civilization because of their role in socializing children, who are the future members of any society. It is through child-rearing that individuals adopt a worldview—i.e. the cultural norms, mores, and notions about the self and its relation to society. Children are habituated with structures and routines to build ontological security (the mental stability that comes with the ability to find meaning and purpose in life) as well as social empathy.

Many researchers even “believe that children’s attachment to their parents, and then to others, is the beginning of morality”—that the sense of self and social awareness as a young child is instrumental in his future ability to be a harmonious member of a community. It is as a young child that humans learn prosocial behaviors—i.e. to “protect, cooperate, and even sacrifice for each other.”[1]

As a logical result, child-rearing has always carried ideological weight. Disconnected from broader kinship networks and with diminishing trust of traditional knowledge, modern parents have lost confidence in themselves and their ability to raise healthy, stable, and moral children and increasingly seek advice from external ‘professional’ sources. However, political and economic ideologies have historically worked their way into child-rearing advice particularly in the West where, without a stable moral basis, advice has changed to reflect the most immediate issues and tensions experienced by a society at large.[2]

A Quick History of Childhood

According to Hugh Cunningham, an expert on social history, the history of childhood more than any other branch of history “has been shaped by the concerns of the world in which historians live in.” It is the anxiety about how children are raised, “about the nature of children (angels or monsters?), about the forces, primarily commercialism, impinging on them, and about the rights and responsibilities that should be accorded to them” that have preoccupied the Western world for the last few centuries.[3]

While contemporary discussions on childhood often veer into liberal discussions on the agency, rights, and freedom of children, historically discussions of childhood have been heavily influenced by Plato who said learning is a recollection of previously known Forms, and Aristotle who believed child-rearing was essentially the basis of moral development. These two philosophers emphasized the role of child-rearing as the basis of building an ideal community—raising a future citizen of the state. Child-rearing for both philosophers was an intentional process of education in the home and in society to instill a particular character in line with social harmony. A principle that is harmonious with Islamic thought in terms of the purpose behind early childhood tarbiyya.

After Plato and Aristotle, the most famous childhood theorist was Philippe Aries with his central claims that “parental investment” varies over time and space, and that the actual behavior of parents is dependent on the way they themselves have been socialized in their cultures. Aries’ suggestion that cultural influence determines the meaning for ideas like childhood, parental responsibility, abuse, and neglect.

In medieveal society, Aries debates whether the concept of childhood even exists. He suggests that it wasn’t until the rise of modernity that education paired with religious reform altered the concept and approach to childhood and childrearing to something more akin to what we would recognize today.

The historian Steven Mintz examines contemporary American childhood. He focuses on how “every aspect of childhood—including children's household responsibilities, play, schooling, relationships with parents and peers, and paths to adulthood—has been transformed over the past four centuries.” He categorizes the changes of childhood in the last four hundred years in three broad categories: 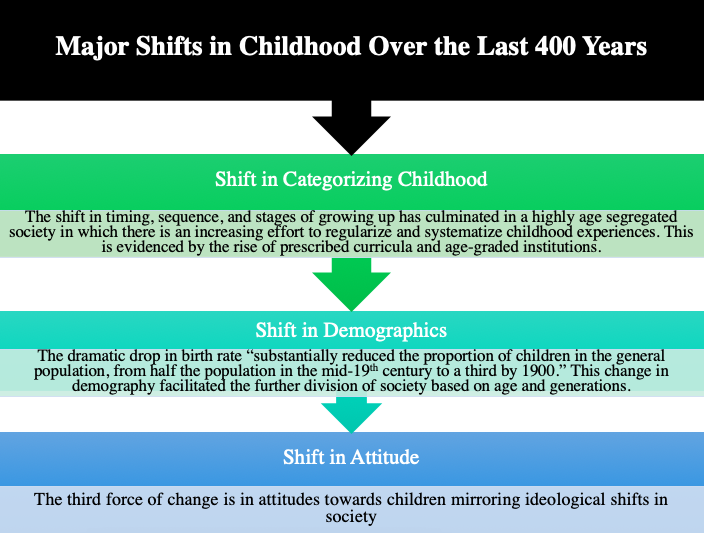 Chronologically speaking, the concept of ‘modern’ childhood emerged in the middle of the 18th century with a set of new attitudes that saw it as a distinct stage of life requiring special care and institutions to protect it. 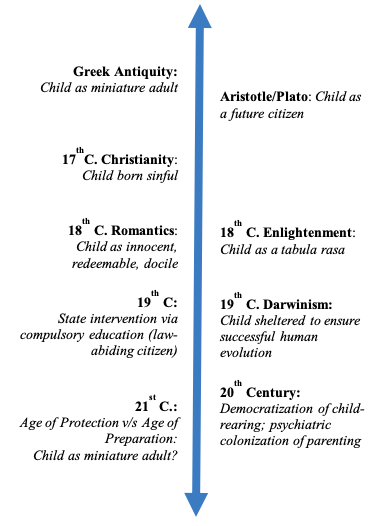 These panics were “more metaphorical than representational” and children have been used “as a lightning rod for America's anxieties about society as a whole.” Society projects its “fears and anxieties onto the young and [has repeatedly] instituted desperate measures to protect them from exaggerated menaces.”[3]

Today, much more than in the past, guilt-ridden, uncertain parents worry that their children not suffer from boredom, low self-esteem, or excessive school pressures. Fear over a new set of modern anxieties related to children’s personality development, gender identity, and their ability to interact with peers have been added to a list of growing concerns for modern parents.

A Timeline of the Changing Conceptions of Childhood in the West

Scholars in the West continue to debate whether it is better to view childhood as a distinct phase of life necessitating parental protection, or to prepare children to deal with the inevitable world of smartphones and social media where parental supervision is limited if at all possible. In other words, Western scholarship is still arrested in defining childhood.

By mapping the turbulent history of childhood in the West, we find a long-standing inability of modern Western society to understand themselves and children.The MuslimTeach perception of childhood and child-rearing takes from a rich Islamic history and scholarship on the nature of man, the fitra, and the stages of human development from our own faith tradition (particularly the hadith and sunnah) that not only addresses the contemporary protection-versus-preparation debate, but also provides a more stable conception of childhood.

Subscribe to the MuslimTeach blog to learn more on how Muslims over the last millenium have understood, defined, and dealt with childhood as well as how the evolution of family affects our ability to be parents.

This blog post was adapted from Arif, Sarosh. (2018) “Ghazali’s Personality Theory: A Study On The Importance Of Humility In Early Childhood,” (Masters Thesis).