When thinking of what the best model of education is for children today, we need to remember that balance is key. There is a lot of wisdom that can be drawn from the past, but that doesn’t mean that the curriculum that worked in the 10th century will necessarily meet the needs of life today.

This post will provide a general overview of three eras of Islamic curricula: the Abbasid period, the Ottoman period, and the contemporary Nizami madrasa curriculum (see the chart below for a quick overview.) We can see trends and patterns in curriculum but also obvious changes that have been explained by scholars and researchers as responses to social, political, and cultural pressures and realities.

This snapshot of curricula over the course of a few hundred years can help us orient ourselves when we think about the ideal curriculum for our children. Again we speak of ideals here since we must also examine the  curricular updates that come from other traditions that are beneficial (but thats a discussion for another post).

DEFINING CHILDHOOD AND WHAT THAT MEANS FOR CURRICULUM AND SCHOOLING…

The current classification of childhood based on age and grade is evidence of changes in society that we cannot ignore. There is a need to acknowledge and adjust for the developmental, environmental, and social changes from the last millennium (please see the Evolution of Childhood post for more detail).

Schooling in the following examples of Islamic history corresponded to what is traditionally known as the Trivium (grammar, logic, and rhetoric) and quadrivium (arithmetic, geometry, astronomy, and music) in the Greek tradition. In Islamic educational history, we can see a similar focus on the trivium after the basic foundations of Quran, Arabic, and Aqidah have been established in the early childhood-middle childhood years. The students continued in these sacred sciences and mastered them depending on skill and interest. This course of education afforded individuals the ability to reason in both language and numbers and ultimately the ability to be able to think 'freely.' 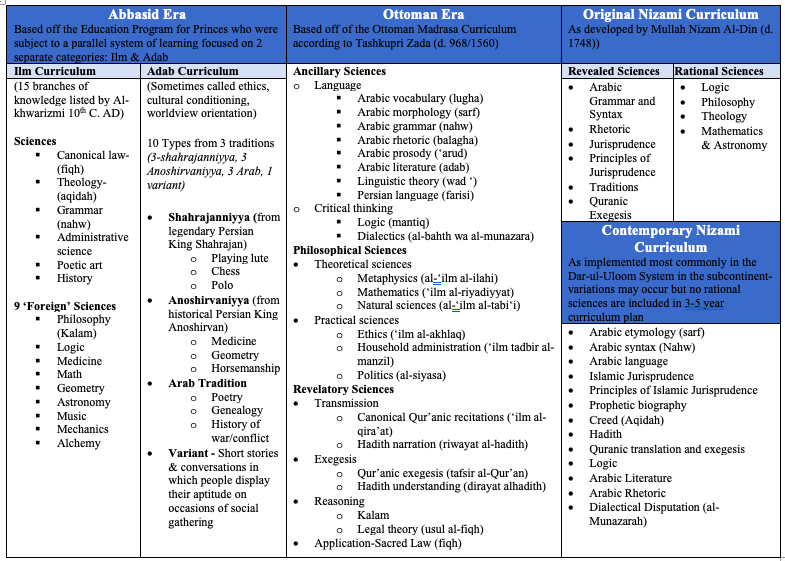 In contemporary times, we see that there has been a tremendous shift in the understanding of education in both what is known as the 'Muslim' world and the 'West.' More times than not, there has been a gradual adoption of Western curriculum (which inherently adopts and promotes a Western worldview including the adab, ethics, culture, logic, and secularism that are at its heart.) While attempts of parallel education, extracurricular classes, and full and part-time Islamic schools are attempts to address the misaligned education systems our children are exposed to, MuslimTeach believes that we should be working from our own foundations to develop a comprehensive and competitive curriculum that does not ignore the rational, secular, foreign, (whatever term you want to call them) sciences but one that maintains high expectations in all of them and with equal emphasis on the revealed, sacred, Islamic sciences.

This blog post was adapted from Arif, Sarosh. (2018) “Ghazali’s Personality Theory: A Study On The Importance Of Humility In Early Childhood,” (Masters Thesis).